What is the Sir Colin Spedding Award?

The Sir Colin Spedding Award is presented annually to an exceptional unsung hero or heroine of the equestrian world. Any individual or organisation from any equestrian field in the UK is eligible, as long as their outstanding qualities have not been formally acknowledged elsewhere. 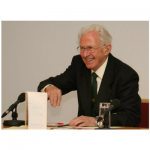 Who was Sir Colin Spedding?

Sir Colin Spedding was the founding chairman of the NEF and chaired the event for 20 years until his death in 2012. He ensured that representatives of all areas of the equine sphere were made welcome to the Forum, and that topics of general interest and concern could be discussed openly and amicably. The award was introduced in 2013, in his memory. 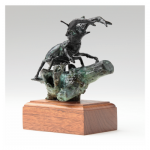 Why is the award a stag beetle?

The bronze sculpture of a stag beetle by Belinda Sillars was originally to have been awarded to the late Professor Sir Colin Spedding, in recognition of his services to the equine sector – most especially for his extraordinary commitment in founding and chairing the National Equine Forum. Sadly he died before it could be presented to him. 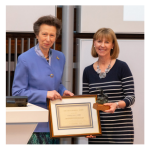 Gordon, represented by his daughter, Boo Powe, was presented with the Sir Colin Spedding Award in 2020 in recognition of his long-standing dedication in many aspects of the Equine Sector both at home and abroad

Pictures of all of the Sir Colin Spedding Award winners, along with the finalists from 2016, 2017 and 2018, can be found in the Roll of Honour.

More information about the Spedding Award can be found on the Podcasts page.

To celebrate the Sir Colin Spedding Award and those who have received it, we include a Memorial Lecture within the programme.  The lecture can be given by the winner of the Award, or by someone with a connection to them.  Details can be found on the Memorial Lectures page.

How do I nominate someone?

The NEF Award Committee will produce a shortlist of nominations, from which the winner will be selected by the Organising Committee. The winner, together with any shortlisted nominees, will be invited to attend the next National Equine Forum, where the Award will be formally presented.